Photographer's guide: How to get nice pictures with your camera

If you have previously been using a compact digital camera, all your pictures were probably saved as JPEG files. Your DSLR camera can produce these files as well, but it also offers the choice of producing Raw files. So what is a Raw file, and why would you want to use it instead of the JPEGs you are used to?

When you take a picture, the camera's sensor records a vast amount of data, far more than is required just to make a JPEG file. When the camera processes the image, it has to discard a lot of that data, in order to produce a smaller file. The resulting image will be fine for most of the uses you might want to put it to, such as printing or sharing the image by email or on a website.

Unlike a JPEG file, a Raw file has not been processed or compressed by the camera. It contains all the data the sensor recorded when it took the picture. This includes a much wider range of colours and tones than would be used in a JPEG, and may also have much more detail in the extreme shadows and highlights. For this reason it is sometimes called a 'digital negative'. And just as developing and printing your own pictures in a darkroom enables you to produce far better results than you can get from your local photo store, the extra data recorded in the Raw file can be used to achieve higher quality images. All it takes is a little practice

To process Raw files, you require a special 'raw converter' software such as the Image Data Converter SR supplied with your camera.

When you open a Raw file in the Image Data Converter, it initially displays the image as it would look if you applied the settings that were on the camera at the time it was taken. You can then make changes to the exposure, white balance, colour mode, contrast and a variety of other settings, until it looks just the way you want. You can even display the 'before' and 'after' images side by side, so you can see the effect you are achieving. And you don't have to worry about getting it wrong. When you have finished adjusting the picture, you can save the result as a new TIFF or JPEG file. The original Raw file remains completely unchanged, so you can come back to it later and make a completely different set of adjustments if you wish.

Examples of what you can get by choosing RAW instead of Jpeg:

In this example, you can clearly notice that the droplets of water hitting the floor are not detailed on the JPEG picture. Also, the overall picture lacks very much details in highlights. 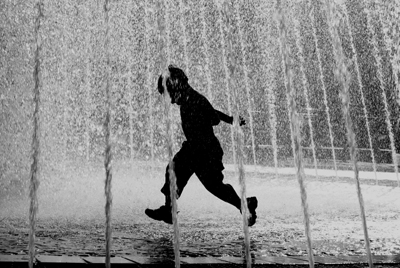 The RAW picture demonstrates that much more detailed can be seen on a picture, making it more intense.

Zoomed details of the difference between RAW and JPEG

In this example, the picture was taken at the end of the day, at sunset. The red light ambiance only lasted a few minutes. The challenge is to recreate this red ambiance in the picture. In jpeg mode, the picture is underexposed and the colours are dull. This picture is has nothing special